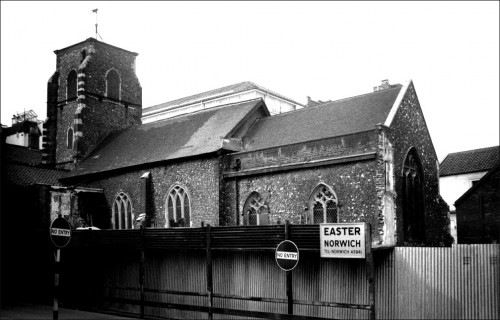 St Mary the Less was built in the 13th Century and has a diverse story. This is a brief history of the church (dates in bold), and protestant refugees in Norwich (dates non-bold).

13th Century
St Mary the Less – St. Mary of Tombland – St. Mary at the Monastery Gates
The church was built in the 13th Century and records show it’s different names
14th Century
Trade was well established between Flanders and the East of England, including wool, cloth, lead, tin, leather, butter and cheese. Norwich flourished as a Staple town, a town where imports could clear customs.
1544
Strangers’ Merchant cloth hall (leased from City)
The Diocese closed the church following Henry VIII’s Dissolution of the Monasteries. The church was subsequently leased to the City of Norwich for 500 years at 4d a year, who leased it on as a cloth hall for Stranger merchants.Strangers were protestant refugees who initially came from Flanders (the Walloons) in the 16th Century. The Walloons were fleeing religious persecution, from Emperor Charles V and later on from Spanish occupation. The Walloons came with skills that included spinning and weaving cloth. Woollen cloth predominated in the Walloon years, silk became more common in the Huguenot period. The hall (church) was where cloth was examined and certified to trade standards.
1564
An Elizabethan charter permitted 30 Dutchmen, with their servants and families (of up to 300 people) to live in Norwich, and manufacture and sell certain ‘outlandish commodities’ not previously made in England.
1612
An Order of James I was granted for the protection and toleration of Strangers.
1623
Hall for the sale of Yarn (leased from City)
The hall (church) was the only permitted market where yarn could be sold within Norwich. The yarn market was moved elsewhere when trade out grew the hall.
1631
Worsted merchant’s cloth hall (leased from City)
1637
l’Église Wallonne de Norwich (leased from City)
The Flemish Walloon congregation moved here from the Bishop’s Chapel. There had been various quarrels as to the repairs to the chapel.
1650
Order in Council of Oliver Cromwell confirmed the privileges to the Walloon Strangers.
1661
Presentation to parliament for foreign churches to continue their services in the Dutch and French languages without penalties.
1670s
The foreign congregation in Norwich fell rapidly. Many had naturalised following the Act of 1673, which had required proof of receiving Holy Communion in an English Church; many had married into English families; and due to competition in trade, many had left for the Irish linen industry and Holland.
1680s
Protestant refugees from France (Huguenots) fled to England at the time of the revocation of the Edict of Nantes (1685). The families who came to Norwich joined the Walloon congregation and the Stranger community.

The Colombine family remained as members of St Mary the Less. From the 1700s onwards other French Huguenots settled in Norwich, but did not worship at St. Mary the Less. The Unitarianists, which the Martineaus converted to, defected to the Octagon. However, due to a dwindling congregation in the 1700s, the church eased relations with other Non-Conformist denominations including Unitarianism, to allow St. Mary the Less to continue as a place of worship. Some Martineaus eventually returned. The Huguenots became the dominant congregation and a number of Huguenots are buried in the crypt.

1832
Swedenborgian New Jerusalem Church
The Walloon and Huguenot congregation had become too small to continue holding regular services and shared St. Mary the Less with the Swedenborgian New Jerusalem Church.
1835
Attorney General Columbine convinced the Court that the church belonged to the Norwich French Church Charity. Their argument founded on the fact that the original lease granted to the Walloon church in 1636 had never been renewed. The charity set a condition that St. Mary the Less not be used by Roman Catholics, and this order still applies.
1869
St Mary the Less (leased from Norwich French Church Charity)
Holy Catholic Apostolic Church (protestant – their name taken from the Anglican creed). In 1953 the Holy Catholic Apostolic Church no longer had a congregation or minister.
1953
St Andrew’s Parish Hall, Church of England (leased from Norwich French Church Charity)
1958
Furniture Store (leased from Norwich French Church Charity)
Rented by a furniture firm Robertson & Colman Ltd. trading from opposite in Queen Street and used the church for storage.
1988
Dutch, Flemish and Walloon History and Study Centre (privately owned)
The church was sold to a Walloon historian for use as a study centre.

Moens, J.C., The Walloons and their Churches at Norwich, Huguenot Society of London.

Storey, B (1957), Memorandum as to the History and Ownership of St Mary the Less Church and Churchyard Queen Street, Norwich.